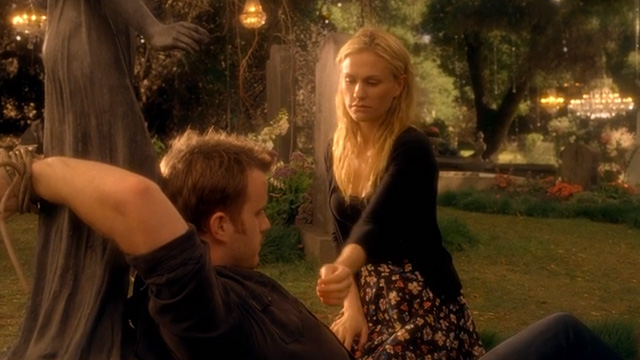 The eighth episode of “True Blood” season six was slow moving and somewhat of a letdown, considering how much had built up last week.

Eric is devastated by the loss of Nora and is furious that Bill failed to bring him Warlow in order to save her. Our favorite handsome Swede accuses the “all powerful” Bill of not retrieving the faerie vampire on account of Sookie.

Of course, godly Bill isn’t too happy about his comments and elevates Eric using his mind. Guess Eric is right, Sookie is still one of the few people that can get under Billith’s skin. Bill ask Eric if he wants to die just like his “weakling maker” Godric, this prompts Eric to inform him, “You’re no fucking God.”

Seeing these two become enemies again so quickly is a bummer. Bill seems to want to make sure everyone hates his gooey guts. Alcide’s wolf pack is pretty pissed that Nicole and her mother aren’t dead like he claimed. Especially Rikki, who taunts the shirt-shy wolf, claiming that he “doesn’t have the balls” to finish her off. He doesn’t but he does get a few good punches in.

Alcide allows Nicole and her mother to seek refuge with Sam and as the two women plan to skip town, he intervenes, saying that he loves Nicole. Seriously, wasn’t he JUST getting over the death of Luna? I mean that shower scene was hot and all, but come on!

Despite her mother’s objections, Nicole is eager to stay with Sam (guess she has a death wish). Sookie re-enters the magical faerie portal and persuades Warlow to help Bill save her vamp friends on the condition that Bill not kill him. Warlow says he’ll do it, but only if Sookie “agrees to be his forever.” He tells her he’s loved her for “nearly 6,000 years.”

How could she refuse after the tryst they had? But despite his strongly articulated feelings, she tells him she needs time to think about it. Apparently, she didn’t hear him right. He said “6,000 years!” Not 6, 60, or even 600. But 6,000!

Sookie reemerges in the human world but doesn’t realize Eric was spying on her and now knows the location of the portal. She goes to visit Bill (during the day, no less) and he assures her that he won’t kill Warlow after he helps he and his fellow vamps out because he has yet to synthesize his blood. Sookie lets him know that Warlow wants to turn her into his faerie vampire bride but Bill doesn’t have time for her petty B.S. and tells her so.

Is it just me, or is their immense hatred towards one another super hot?

Sookie then visits Sam, who she rarely interacts with. Surprisingly, he doesn’t scold her for NEVER showing up to her job. She tells him that a part of her has always thought they’d “wind up together.” Since when?!

Naturally, this pisses Sam off because he’s spent a considerable amount of time “waiting in the wings” for her. To make matters even more complicated, he reveals that Nicole is pregnant. He knows this because he can smell it on her. Yes, Sam knows his girlfriend is with child and she has no clue. Let’s pray to Lilith that we get to witness him tell her that she’s carrying his baby. Sookie then goes on a journey of self-reflection in which she visits her parents’ graves and leaves Jason an emotional voicemail. Doesn’t she know by now to assume the worst when she hasn’t heard from someone in a while?

Ultimately, she decides to be Warlow’s bride. She dresses up in a fancy black lace dress and everything. But when she arrives in Faerie-land, with Bill in tow, she finds Warlow’s lifeless body (or so it looks like). Bill quickly concludes that this must be the work of Eric. Does this mean he’ll have more screen time next week? Allow Me to Introduce You to…the Sun

Back at Vamp Camp, Violet tells Jason that he’ll be hers forever and it seriously freaks him out. James (aka vampire guy who refused to rape Jessica) warns Steve Newlin not to drink the tainted Tru Blood, and afterward, Newlin stupidly confides in Sarah.

After his crazy ex impales and kills the Ms. Suzuki, the Tru Blood spokeswoman, she has the in-the-know prisoners (Jessica, Tara, Pam, Willa, Steve, James) placed in confinement together. Jessica recognizes that the setting they’ve been put into matches Bill’s vision and tells the group that they’re about the meet the sun. Andy’s remaining faerie daughter Adilyn Braelyn Charlaine Danika hooks up with Holly’s son. Who didn’t see that coming? Eric interrupts the teens’ makeout session and feeds on the faerie girl. Later, Andy finds her running through the streets bitten and crying and consoles her.

Lafayette (who still has hardly anything to do on the show) tells Arlene about Terry’s $2 million life insurance policy. In the end, she decides to put aside the fact that Terry was responsible for ending his own life and keep the money.