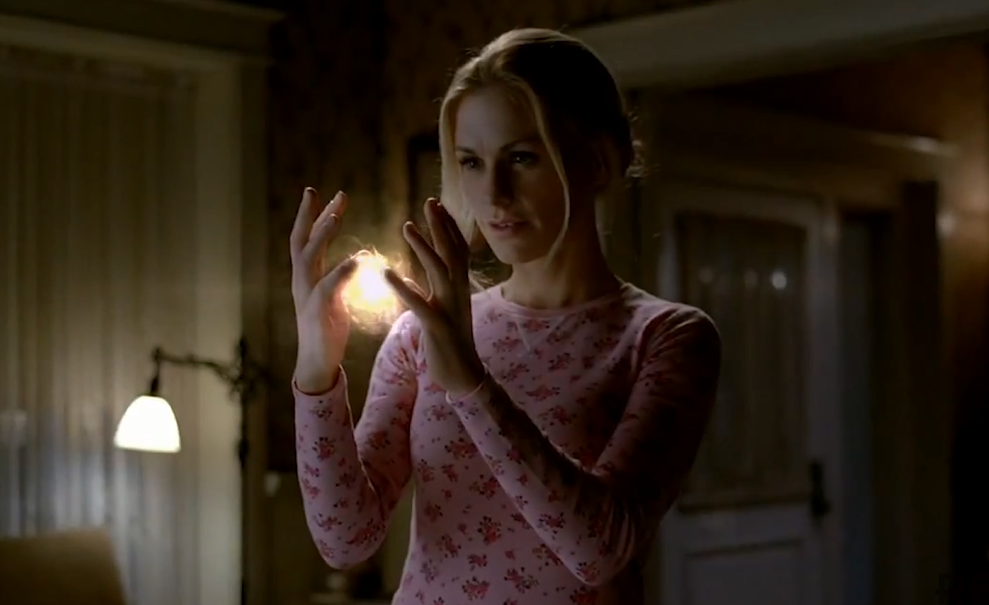 The second episode of True Blood‘s sixth season was filled with the plot twists, metaphors and epic death scenes that made the show great to begin with.

As was the case with the season premiere, the HBO hit has returned to being a show about civil rights and the dangers of prejudice, and we have to say, last night’s episode was surprisingly touching and further proved that this season is making up for the luster the show lost last year.

The episode opens with a Rob Zombie looking vamp emerging from another dimension and he looks pissed.

We then see Jason and the mysterious vanishing stranger he accepted a ride from in the previous episode. Turns out he’s not Warlow (the man who killed he and Sookie’s parents) but his “fairy fucking grandfather.” Is it just me, or does this guy look like Christopher Walken’s long lost brother?

After he puts Jason in his place, he tells him he is going to be unprepared for what is to happen next. Cue suspense music.

Back at Fangtasia, Pam comforts Tara, who is now screaming bloody murder after being tazed repeatedly. She’ll be fine though because vampires always heal after they’re injured, right?

Not this time! Apparently, there are some fancy new guns that can seriously harm the undead. Tara’s injury is not only gross, it emits a blue light. WTF! Thankfully, Eric and his “sister” arrive and save the day. Eric removes the bullet with a piece of broken bottle (yikes!) and discovers that the bullet is not only silver, it contains a UV light. (Insert vampire freakout here).

Of course, Eric doesn’t play that game. He’s never been scared of humans and he sure as hell isn’t starting now. He’s all like, “If the humans want war, we’ll give them war!” You go boy!

Meanwhile, Bill is going batshit cray cray because of his newfound godliness, which allows him to feel all of the pain vampires are enduring at that moment. Turns out he does have some empathy left and he’s got the blood tears streaming down his face to prove it. As Sookie is rushing to Merlotte’s (apparently she’s still waitressing), she finds a fellow half-fairy injured in the woods. Based on the way these two flirt, something tells us he’s going to be Sookie’s next love interest.

Jessica orders an “edible human” for Bill to feed on because his visions have put him into a bizarre trance. Unfortunately, for the girl, Bill his able to contort her body and transfer her blood straight into his own mouth. It’s pretty much one of the best death scenes ever. Elsewhere, Eric poses as a geeky wildlife worker as a means of getting to the governor. Why doesn’t this guy adopt disguises more often? He’s a riot to watch.

While we expected Eric to go Medieval on this guy’s ass, he attempts to glamor him into “loving” vamps. There’s just one problem; the human’s have developed special contact lenses to protect them from that sort of trickery.

Eric is subsequently taken away by guards after the governor laughs at him in his face and hisses at him, of course.

Later, we learn that the poorly groomed vamp from the episode’s opening is Warlow (we knew it!) and he is “obsessed” with the Stackhouse family.

In a scene uncharacteristic of the series, Jessica prays. She tearfully blesses everyone from Sookie to her ex Hoyt and pleads for Bill to become his old self again. Bill then emerges from his trance,  and discovers that he can see the future, and guess what he sees. Vamps being held against their will and burned to death! Basically all of the stuff he saw earlier before falling into his trance. Noooooooooooo.

Other plot-lines from the episode:

A strange women named Nicole (played Jurnee Smollett-Bell) visits Sam and tries to convince him to come out as a shifter. Lafayette has been chosen to babysit Luna’s now orphaned daughter (hopefully we’ll see more scenes of this hilarity). But that all changes when Alcide and his pack come and take the little girl away.

Arlene and Terry convince Patrick’s pregnant wife that he must have ran off with another women, because, you know, telling her what really happened — a fire demon took him away — probably wouldn’t go over too well. Sookie finds out she’s a fairy princess (her and Jason’s “fairy grandfather” is the king) and the Stackhouses are the original fae. Sookie also learns how to harness a special secret power of hers that has been passed down through their family that can obliterate any vampire who its used on. But she must be careful though, since she’s only half fae, and once she uses that, she will lose her powers.

And while Bill was in his coma, he discovers who and what Lilith really is. For one, we finally get to see her fully clothed and not covered in blood, and two, she said she’s not a “vampire god,” but is as close to one as humans and vampires can understand.

“God made me as vampire, and Adam and Eve as human,” she explains. “But there is no God but God.”

Lilith also speaks on a “tyranny” rising and tells Bill that he needs to “complete [her] work.”