Those hilarious little yellow minions from “Despicable Me” are back for more shenanigans and mischief, as seen in the newly released trailer for “Despicable Me 2.”

It’s been three years since the original animated film made its debut, and the sequel continues the amusing tale of the lovable ex-super villain Gru (played by Steve Carell) and his three adopted daughters.

This time around, Gru is “recruited” (read: kidnapped) by the Anti-Villain league as he faces a new nemesis voiced by “The Godfather” himself Al Pacino, while Kristen Wiig, Miranda Cosgrove, Russell Brand, Ken Jeong and Steve Coogan round out the rest of the movie’s all-star voice cast.

Watch the full two-and-a-half-minute trailer — scored to Eminem’s “Without Me” — below: 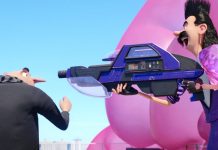