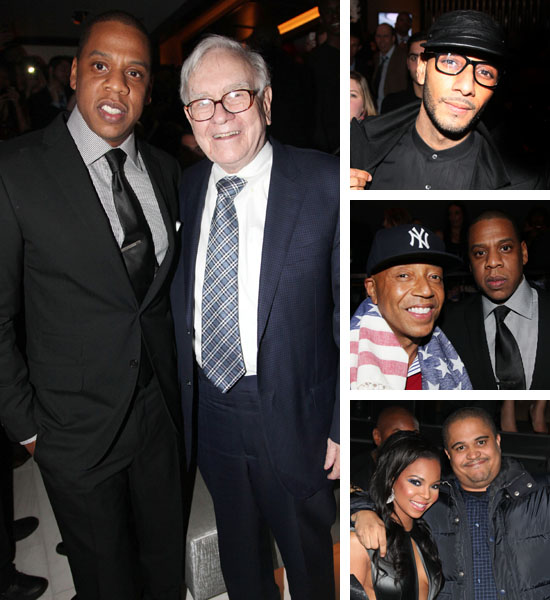 New dad Jay-Z partied in style as he made his first public appearance since the birth of his daughter Blue Ivy Carter Wednesday night (Jan 18) at the relaunch of his 40/40 nightclub in New York City.

Of course his wife (and new mom) Beyonce stayed at home with their newborn daughter, but there were plenty of other celebs who showed up to party, including Swizz Beatz, Ashanti, Russell Simmons, Kevin Liles, producer Rico Love, supermodel Selita Ebanks, filmmaker Spike Lee, record executive Steve Stoute, and many others.

Even Warren Buffett — the THIRD RICHEST MAN IN THE WORLD worth around $50 billion — partied with Jay-Z and his industry friends, and was even spotted throwing up the “Roc” sign. (That sh*t cray!)

According to various reports, Jay-Z laid on a champagne tower made of 350 handmade gold Armand de Brignac bottles that stretched from floor to ceiling, and was topped with a stork carrying a baby.

“All that preparation must have been thirsty work – judging from the champagne tower Jay laid on. Nothing like that has ever been created before,” an anonymous source said. “It was a bit [over the top] but he’s [crazy] about his daughter. There’s nothing he wouldn’t do for her. You’d expect nothing less from the richest man in rap.”

Check out over 20+ photos below: