You may know Donald Glover from the hilarious NBC show “Community.” But what you probably didn’t know is that he raps under the name Childish Gambino, and he’s promoting his debut album “Camp,” which is in stores now.

From that album is a single called “Heartbeat,” which Gambino performed last Thursday night (Dec 22) on the “Late Show with David Letterman.”

Wearing the same red shirt, earlier in the day, the rap newcomer had also paid a visit to BET’s “106 & Park,” where he talked about how he balances his comedy, acting and music, and also kicked a freestyle.

Watch him perform on David Letterman below, and scroll down a little more for the video footage from his 106 & Park appearance: 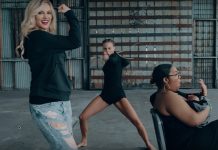 A White Woman Released an Unseasoned, Gentrified Version of Childish Gambino’s “This is America,” and It’s Pretty Terrible TBH