Jordin Sparks was by far not the first choice to play “Sparkle” in the upcoming movie remake.

During a recent interview with Access Hollywood, Whitney Houston revealed that Aaliyah was originally suppose to star in the film:

“This was [Aaliyah’s] movie, when we brought it to her, she was so enthusiastic about it and she wanted it, to do it so badly. She was our Sparkle. Unfortunately, it just didn’t go that way. I put it down. I said, ‘My Sparkle has gone to a better place,’ then we just left it alone.”

We can only imagine how great this movie would have turned out if Aaliyah was still with us today.

Side note: Whitney has been impressing us so much lately. You go girl! 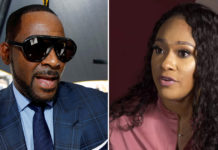