GOSSIPONTHIS.COM Celebs Pia Toscano Had a Feeling She Was Getting Eliminated
ShareTweet The elimination of American Idol hopeful Pia Toscano was a pure shock to most, however Toscano herself says she had a feeling it was coming. “I don’t know what it was,” she told reporters during a conference call Friday.

“I didn’t feel bad about my performance Wednesday night, and I wouldn’t change a thing. But you know when you have that feeling in your stomach?”

The 22-year-old was eliminated from the popular talent competition series last week after placing 9th, and her departure is said to be one of the most unexpected in the show’s history (even bigger than the elimination of Tamyra Gray on Season 1). But that doesn’t mean her career is over.

So far, a couple of record labels and execs are already interested in her. In fact, Jimmy Iovine (founder/chairman of Interscope) is a “mentor” on the 9th season of Idol, and Interscope is rumored to be one of the labels courting Toscano.

Check out a few pics of Pia leaving “Live with Regis & Kelly” earlier today below! 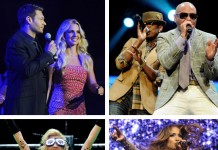