In Touch’s press release goes on to say:

With her slim frame, toned arms and legs and amazing abs, it’s easy to wonder how Audrina Patridge maintains her ridiculously hot body. Sure, a healthy, active lifestyle and a diet full of fish and veggies help, but as the star of VH1’s upcoming reality show, Audrina, admits, she has her mom – and 69-year-old grandmother – to thank.

“When we go out, people think my mom is my sister and my grandmother is my mom!” she tells In Touch. “They’re gorgeous!” Meanwhile, while there’s been a lot of plastic surgery talk when it comes to Audrina’s transformation from girl-next-door cutie to total sexpot, she tells In Touch she’s never “done anything,” but doesn’t judge people who have.

“To each their own,” she says. “I do think people take it to such a point where they regret it, though,” she adds. With the whole Patridge family filming their ups and downs for Audrina – which debuts on April 17 – there will be no shortage of straight talk from Lynn, who dissed Lauren Conrad in a Hollywood.TV video that went viral late last year.

“I’ve watched the Kardashians and I can tell you our family will blow theirs away!” says Lynn. “I don’t mean that as an insult, but what you see is what you get with us. We’re 100 percent real.” 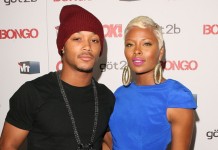 Christina Milian, JoJo, Rob Kardashian and Others Party with Audrina Patridge in Hollywood

Dancing with the Stars: Brandy, Audrina Patridge and More to Join the Cast Next Season?