An arrest warrant has been issued for “Kill Bill“ and “Reservoir Dogs“ star Michael Madsen, who reportedly owes $570,000 in unpaid child and spousal support, according to TMZ.

According to court documents, Madsen failed to show up for a hearing in his child/spousal support case last week … so the judge found him in contempt and issued a warrant for his arrest.

Over half a million dollars in unpaid child support. What a douche. 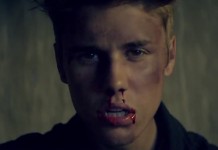 Justin Bieber Beaten and Bloodied in “As Long As You Love Me” Video (feat. Big Sean)