GOSSIPONTHIS.COM Celebs Travis Barker Gets into Scuffle with Photographers
ShareTweet Over the weekend, rock star Travis Barker got into a scuffle with a couple of paparazzos outside the Cafe Marmalade, a restaurant in Calabasas, CA. Apparently, some photographers harassed him and his daughter as they entered the restaurant and Travis basically told the photographer, “I’ll kick the s**t outta you bro… if I didn’t have my little girl in my hands … give me an hour and I’ll meet you.” The photog said he’d be waiting.

As Barker exited the restaurant, he got into a yelling match with a new set of photogs and ultimately, the police ended up being called and the situation was quickly settled.

Since then, videos have been released of the incident and Travis Barker has released a brief statement via his Twitter:

Bottom line, take photos at red carpets. Take pics of hungry hollywood starlets and douche bags that are out at clubs and bars that like it. Bottom line I don’t. I’m not a socialite out begging for that kind of attention. I’m a family man out wit my kids. Don’t get the 2 twisted. And of course all the footage these lames released to the press is one sided cause they edited it.

Continue reading for videos of BOTH incidents…

VIDEO #1 – GOING INTO THE RESTAURANT 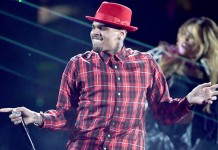