Melanie Brown and her husband of over two years Stephen Belafonte were spotted by the British paparazzi making their rounds in London Thursday afternoon (Sep 3).

In related news, the former Spice Girl has revealed that Playboy Magazine wants her to pose nude after they saw her pop out of a giant cake at Ultimo’s 10th anniversary celebration earlier this week, but she turned them down and only plans on doing it she feels “the time is right.”

She told British newspaper The Sun: “I’ve turned it down four or five times now.They’re offering me a ridiculous amount of money to do it, so that’s not the problem. I’m just not ready to do it. But I’ll definitely consider it in the future, when I feel the time’s right.” 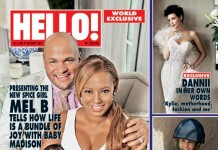 Mel B & Stephen Belafonte Show Off Their Newborn Daughter Madison on the Cover of HELLO! Magaizne

Mel B. is Pregnant with Her and Husband Stephen Belafonte’s First Child Together!