Def Jam recording artist Amerie‘s upcoming fourth album, In Love & War, originally slated for a September 29th release, has reportedly been pushed back to November 3rd. This marks the fourth time the album has been issued a new release date. But surprisingly, Amerie isn’t bummed about it.

“Very happy w/my album date! Got the one I wanted,” she tweeted. “So I’m officially putting it out there: In Love & War — November 3, a special date…”

In Love & War will feature production from The Buchanans, Teddy Riley (“Tell Me You Love Me”), Sean Garrett and Eric Hudson (“Heard ‘Em All”), Jim Jonsin and Rico Love (“Swagback”), and Bryan-Michael Cox (“Red Eye”).

The R&B singer dropped by Elle Magazine’s offices for an interview recently and they were so taken aback by her style, they posted these pictures of her on their website. Check them out below! 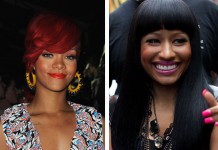