Rapper Flo Rida performed live on stage at the top 8 elimination show for the 8th season of popular Fox series American Idol at a Los Angeles taping of the show. He performed his hit single, “Right Round” and decided to keep it clean for the kids and their parents, and kept his shirt on. Rapper Mims just released his sophomore album Guilt this past Tuesday and above he can be seen at his album release party Tuesday night at Citrine in New York. Looks like the poor guy was the only one in attendance. 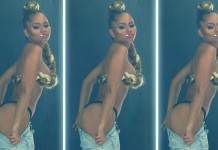