Former America’s Next Top Model hopeful Toccara Jones has been making moves lately. Despite the fact that she obviously didn’t win, she appears on a lot of television specials for BET, has been featured in several print/modeling campaigns for Lane Bryant, participated in the second season of VH1’s Celebrity Fit Club and now she’s featured on the cover of the May 2008 issue of King Magazine. This particular issue hits stands March 12th! 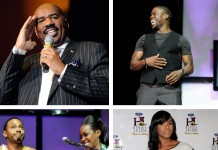