GOSSIPONTHIS.COM Hip Hop Did Nicki Minaj and Cardi B Finally Squash Their Beef For Good? 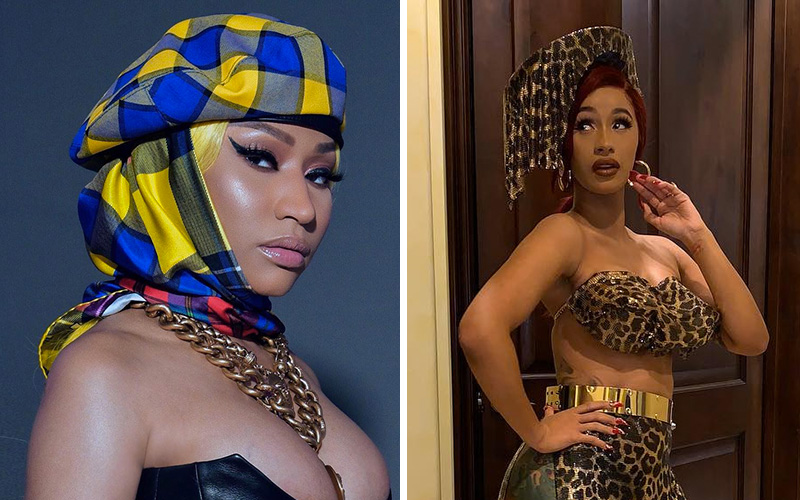 Nicki Minaj and Cardi B have either squashed their beef or simply pressed the pause button after sparring online Monday (Oct. 29).

Following their Harper’s Bazaar incident in September, in which Cardi threw a shoe at Nicki and walked away with a knot on her forehead (either from security or Rah Ali, as Nicki later claimed), both parties have continued to toss jabs back and forth, whether it be on wax or social media posts.

Nicki even started selling merch saying “Nicki Stopped My Bag” in reference to Cardi’s Instagram post explaining why she went after Nicki the night of the shoe incident.

But following a recent episode of Nicki’s Beats 1 “Queen Radio” show, Nicki appeared to make a truce to end her beef with Cardi—or at least stop talking about it all the time.

On “Queen Radio” Monday, the “Chun-Li” rapper alleged that Cardi, 26, blocked husband Offset and rapper 21 Savage from collaborating with her on a “Krippy Kush” remix, an accusation — among many others — that Cardi vehemently denied in a series of Instagram videos that night.

“You wanna talk about how I wanted to be on the ‘Krippy Kush’ remix and I wanted to stop your bag? Sis, what are you talking about?” Cardi said, adding that Minaj, 35, turned down a feature on G-Eazy‘s “No Limit,” then got mad at her managers when Cardi’s verse on it contributed to the song becoming a hit.

Elsewhere in Minaj’s broadcast, she said Rah Ali was the one who gave Cardi the knots on her head during the infamous brawl at the Harper’s Bazaar Icons party, sniping, “Rah really, really beat Cardi’s a** bad. Rah beat you so bad that I was mad at Rah. You went home and told people security hit you, and we let that ride for legal reasons. Anybody that wanna pull up the surveillance footage, I will give you $100,000.”

Cardi responded to that as well, snapping, “How [are] you saying I got ragged by Rah Ali when there’s so many footages [sic] of that night, every single angle, and where am I getting ragged at? … How you say that I’m the wild animal, that I attacked you, that you was mortified, that you was humiliated, playing the victim but now you a gangsta?” She added, “First you say that your cameraman got the footage, but now you talkin’ about you wanna pay somebody $100,000 if they got the footage?”

The “I Like It” rapper also threatened to sue Minaj for defamation of character due to Minaj’s payola claims.

Cardi also claimed that she actually helped Minaj get work, saying she turned down a deal with Diesel that eventually went to Minaj because she had other fashion endorsements (including Fashion Nova), and that she turned down a feature on Little Mix‘s “Woman Like Me,” which also went to Minaj — and she came with receipts, including emails from Diesel and a “Woman Like Me” track with no rap verse over the instrumentals.

Little Mix, however, responded with an Instagram story claiming that they wanted Minaj to be on the song all along, which Minaj relished in on her own Twitter account.

Minaj and Cardi’s beef dates back to the release of Migos‘ “MotorSport,” after which Minaj accused Cardi of disrespecting her and making her cry. Cardi denied dissing Minaj, saying Minaj was the one who hurt her feelings and allegedly attempted to sabotage her career and use her fans (called Barbz) to attack her.

The feud appeared to hit its apex when the ladies and their entourages got into a melee at the Harper’s Bazaar Icons party at New York Fashion Week in which Cardi hurled a shoe at Minaj.

By later Monday evening, however, it appeared the rappers quashed their beef … for now.

“Ok you guys, let’s focus on positive things only from here on out. We’re all so blessed,” Minaj tweeted. “I know this stuff is entertaining & funny to a lot of people but I won’t be discussing this nonsense anymore. Thank you for the support & encouragement year after year. Love you.”

Cardi posted a screenshot of Minaj’s tweet, remarking, “Alright then! Let’s keep it positive and keep it pushing!”

Ok you guys, let’s focus on positive things only from here on out. We’re all so blessed. I know this stuff is entertaining & funny to a lot of people but I won’t be discussing this nonsense anymore. Thank you for the support & encouragement year after year. Love you. ??

It sure does look like the beef between Nicki and Cardi has been squashed, but you never can tell with these two. Nicki’s already being accused of coming for Cardi in her new song with Tyga.

Do you think Nicki Minaj and Cardi B’s beef is finally over?