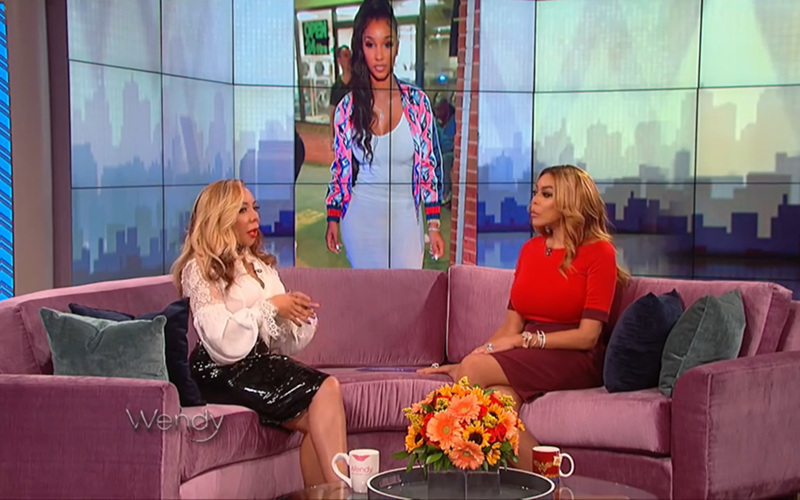 Don’t let the surgically faked blue eyes fool you, Tameka “Tiny” Harris still keeps it all the way real. The singer/reality star recently appeared on The Wendy Williams Show and did not hold back when discussing her divorce with T.I. Harris or his alleged side-chick.

Tiny sat on Wendy’s purple couch on Thursday (Apr. 20) to promote the sixth and final season of T.I. & Tiny: The Family Hustle and nothing was off limits. Though she conceded reality TV may have put a “little strain” on her marriage because “it keeps people in your business,” she made it clear that infidelity and lack of trust were key factors in her decision to file for divorce.

She also stated the couple was NOT in an open marriage.

“No. We don’t have anything now. It’s not an agreement. No. We just were married and we did what we wanted to do.”

Messy Wendy had to ask about Bernice Burgos, the woman who is rumored to have come between T.I. and Tiny and has also been in a nasty social media feud with Tiny. “Who is this girl?” Wendy asked as a picture of Berenice was plastered behind the two.

“She’s somebody that comes in and… you know, there’s nothing to it, what he [T.I.] does, you know?” Tiny shrugged off. She also added that the Bernice and T.I. are not living together, a rumor that has also been swirling.

“No. He’s not even with her, first of all, and she had nothing to do with whatever was going on with us before, anyway. We were already going through whatever we were going through. She just came in the picture after I had filed for divorce.”

Tiny also addressed the social media beef the two have had over the last few weeks.

“The only problem I had with her was…somebody made a comment about her on my page. I said what I said. She replied. That’s cool, but then you come back with another video speaking about my marriage. That’s a no no. And then come back with the final video singing my song, and I’m feeling like, ‘OK, now you keep coming.’

It’s no secret what T.I. was doing throughout their 6-year marriage (and 15-year relationship), in fact, he recently admitted he couldn’t be the “thoughtful” husband he should be due to his ways.

However, Tiny has been rumored to have her fun as well, most notably with Floyd Mayweather. But she denied anything went down between them at that infamous Mariah Carey Halloween party.

Wendy: Why you in Vegas all up on Floyd Mayweather’s crotch?

Tiny: Well, first of all, I was in LA. I was at somebody else’s party. I was at Mariah [Carey’s] party. I wasn’t at Floyd’s event, and honestly, if [T.I.] was doing the right thing, I wouldn’t have been at Mariah’s party, OK?

Tiny filed for divorce in December after six years of marriage. They have three children together, including 1-year-old Heiress. They also have four step-children between them. Though the two have said and appear to be amicable, I’m getting the feeling T.I. & is really over.