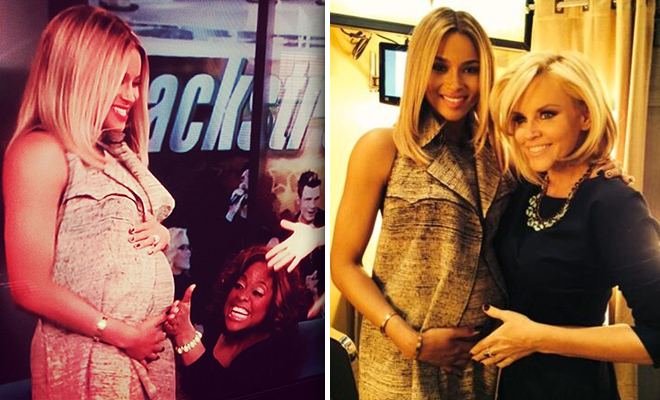 Ciara has finally confirmed her pregnancy!

The R&B/Pop singer appeared on “The View” this morning and officially revealed that she and her fiance Future are expecting their first child together.

When Barbara Walters asked her if she had anything to say about the rumors surrounding her (then) alleged pregnancy, Ciara stood up, pulled her coat back and proudly showed off her growing baby bump.

“I’m so excited. Last year was, like, the best year of my life,” Ciara told the hosts of ‘The View.’ “Being able to get a fresh start with a new label … and of course the engagement.”

She also talked about being in the studio with Future as she works on her new album under the direction of L.A. Reid, and revealed some other pretty big news too.

Asked if she was planning on getting married at some point year this year, Ciara said, “Yes, I am actually.”

After the show, “The View” co-host Jenny McCarthy tweeted a picture of herself and the mommy-to-be, writing, “Congrats to my girl @ciara so happy for your bun in the oven.”

Congrats to my girl @ciara so happy for your bun in the oven. pic.twitter.com/euMZC6bi6q

In November, CiCi spoke to E! about her upcoming wedding with Future and starting a family.

“We talked about what we want to do,” she said. “We don’t have all the details yet but I definitely want it to be very special and I know I don’t want it to be when it’s burning hot. I want perfect weather! Like, right when the sun starts to get really warm or right when it ends.”

Before her big pregnancy announcement on “The View” this morning, Ciara posted a picture on Instagram of herself walking with an umbrella in rainy New York City along with the following caption:

Ciara’s pregnancy has been rumored for some time now. Back in October, folks started talking when she was spotted wearing clothing that was clearly intended to cover her stomach to hide the fact that she had one. Speculation grew after her appearance at an Atlanta toy drive over the holidays, and more recently, during her trip to Italy for Milan Fashion week with her soon-to-husband.

No official word just yet on how far along she is, but based on educated guesses … she seems to be AT LEAST six to eight months along, meaning, this baby could be here ANY day now.