GOSSIPONTHIS.COM Celebs Dennis Rodman Apologizes for CNN Meltdown: “I Had Been Drinking” 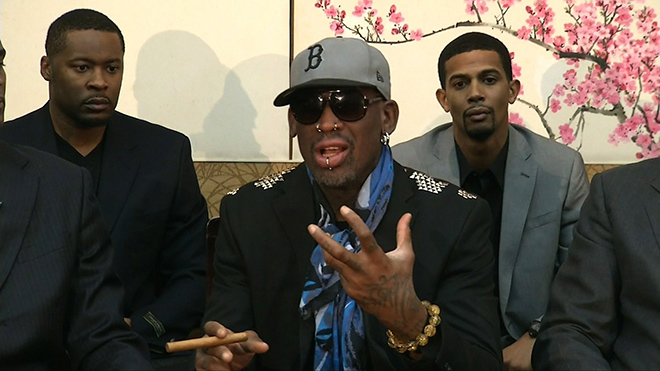 Dennis Rodman was in North Korea to play basketball for Kim Jong Un’s birthday, and in an interview with CNN earlier this week, the unauthorized North Korea ambassador suggested that American missionary Kenneth Bae, who was accused of crimes against North Korea, may have done something wrong to deserve the treatment he’s getting.

At that point, Rodman clearly lost his mind and began screaming about sacrifice, and how he didn’t give a “rat’s ass” about what Cuomo thought, among other things.

After his meltdown on live TV went viral on the Internet, Rodman, who has called the North Korea’s controversial leader Kim Jong Un a “friend for life” on several different occasions, obviously realized how much of an a-hole was being, or something, because on Thursday, the former NBA basketball player apologized, chalking the whole thing up to a very “stressful day” that included a lot of “drinking.”

“I want to apologize,” Rodman said in a statement to the Associated Press. “I take full responsibility for my actions. It had been a very stressful day. Some of my teammates were leaving because of pressure from their families and business associates. My dreams of basketball diplomacy was quickly falling apart. I had been drinking. It’s not an excuse but by the time the interview happened I was upset. I was overwhelmed. It’s not an excuse, it’s just the truth.”