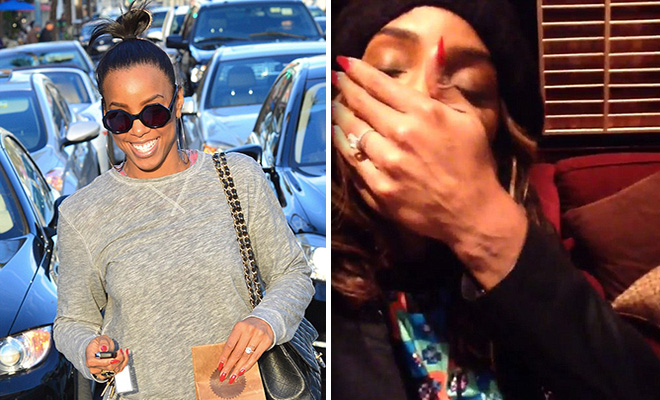 The Hollywood rumor mill is spinning with reports that Kelly Rowland is engaged to her longtime boyfriend and manager Tim Witherspoon.

And while the R&B singer has yet to speak on the gossip surrounding her relationship, she was spotted in Beverly Hills last Tuesday (Nov 26) wearing a rather large diamond ring on the same ring finger guys usually put a ring on.

Rowland unintentionally let the cat out of the bag herself several weeks back when she accidentally flashed the same ring in an Instagram video on a friend’s account, all but confirming that she is, indeed, engaged to be married.

Bossip was the first to break the news of the low-profile couple’s engagement, which according to the website, was sometime in early November. Tim proposed and, obviously, she said yes!

US Weekly also claims to have spoken with a source who confirmed the news to them: “She has been showing [the ring] off to friends and family and is very happy … She wants to…enjoy [it] and celebrate for a bit longer.”

Those privy to Kelly’s love life know that this is her second engagement, as she was previously engaged to marry football player Roy Williams before they ended their relationship in January 2005, just two months before their planned wedding.

“I was too young for marriage,” Rowland later told Cosmopolitan UK of their breakup. “But sometimes you fall down and you learn from it.”