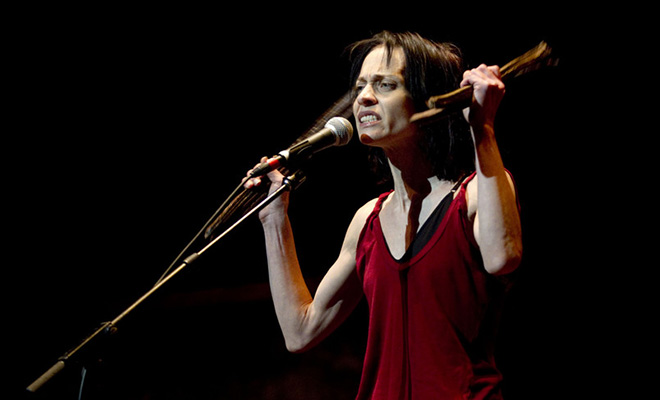 Making negative comments about a person’s weight typically doesn’t end well and that’s certainly the case when said comments are being made to a singer while she’s entertaining a large crowd.

According to Stereogum, Fiona Apple was performing a show in Portland, Oregon Thursday night when a fan yelled out an unnerving comment about her weight.

“Fiona! Get healthy! We want to see you in 10 years!” the female audience member yelled out.

This understandably struck a chord with the “Every Single Night” singer who made it a point to remove the singer from the venue.

“I am healthy! Who the f*ck do you think you are? I want you to get the f*ck out of here. I want the house lights on so I watch you leave!” the Grammy-winner retorted.

As the concert-goer exited she added, “I saw you 20 years ago and you were beautiful!”

The 36-year-old reportedly had trouble collecting herself after the incident and tearfully got through her next song “Waltz (Better Than Fine),” before exiting the stage.

This is not the first time, Apple’s health has generated attention. When Apple rose to fame in the late 90s’, her dramatically thin appearance sparked rumors that she had an eating disorder.

As her debut album ‘Tidal’ climbed the charts, many couldn’t help but focus on her appearance in the music video for “Criminal.”

In a 1998 interview with Rolling Stone, she admitted to having major issues with food and said that the illness stemmed from being sexually assaulted at just 12 years old by an intruder at her mother’s New York home.

“I definitely did have an eating disorder.  What was really frustrating for me was that everyone thought I was anorexic, and I wasn’t. I was just really depressed and self-loathing,” she said.

“For me, it wasn’t about getting thin, it was about getting rid of the bait that was attached to my body. A lot of it came from the self-loathing that came from being raped at the point of developing my voluptuousness,” she explained.  “I just thought that if you had a body and if you had anything on you that could be grabbed, it would be grabbed. So I did purposely get rid of it.”

Apple’s more recent weight loss made headlines last year after she appeared at a series of concerts looking alarmingly frail.