J.R. Martinez is going to be a dad!

After winning the mirror ball trophy on the latest season of “Dancing with the Stars” last month, the former soap star has even more reason to celebrate.

He and his girlfriend Diana Gonzalez-Jones are expecting their first child together…..and it’s a girl!

“We found out just last week it’s a girl and we are over the moon,” 28-year-old Martinez told People. “Diana has a little baby bump now and it’s the cutest thing ever. With the holidays coming up, this is the biggest and best gift we could get.”

Martinez — an Iraq war vet — and his girlfriend Gonzalez-Jones met back in 2008 when he landed a role on the hit soap opera “All My Children,” where Gonzalez-Jones was working as an assistant to the show’s executive producer.

After initially meeting, the pair became close friends, and the rest, as they say, is history.

“We were so good as friends that romantically, we just clicked right away. There was no adjustment period,” Gonzalez-Jones told PEOPLE earlier this year.

Now that the thought of being a father “is sinking in,” Martinez says, he admits that he can’t believe all of the good things that have happened to him over the past year. 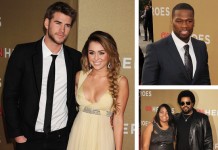 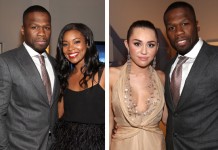 50 Cent Hangs Out with Gabrielle Union and Miley Cyrus at the 2011 American Giving Awards in L.A. [PHOTOS]