Marsha Ambrosius has released the official music video for “Far Away,” the second single from the former Floetry singer’s upcoming solo album Late Nights, Early Mornings (due in stores February 22nd). The video showcases the struggles homosexuals in today’s society go through, from dealing with the bullying and taunting, to having thoughts of suicide.

“Dear friends, every year over 1 million people commit SUICIDE. Some were BULLIED because of their SEXUALITY. I lost a friend to SUICIDE, and I’m asking all of you to support alternative lifestyles,” Marsha states. “Don’t put up with or join in with BULLYING. It’s time we become more aware in this WORLD. Take a responsibility to make a difference. So if my MUSIC can save one life, I’ve done my job.”

Check out the new video below:

Thoughts on the video? 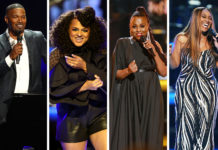