Law enforcement sources tell TMZ the 19-year old was seen allegedly buying the marijuana and rolling a joint while sitting in a car on Manhattan’s Upper West Side. We’re told he tried to get away by throwing his car into reverse, and nearly backed into the officer’s car.

What a way to kick off the weekend, huh? Dumbass…

Word on the curb is that the Simmons family is in the middle of filming their new season of Run’s House, but no word  on if cameras were rolling when JoJo was arrested. Regardless, we have a feeling this issue will make its way into the show somehow, someway. 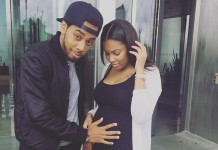 JoJo Simmons and His Girlfriend Tanice Are Having a Baby Girl