The San Antonio Spurs win Game 6 at home against the New Orleans Hornets. CP3 didn’t come through like I wish he did but he had a pretty good game overall. The Spurs did take the win by 11 (99-80). The series is still tied though (3-3). Tim Duncan scored 20 points, 15Â reboundsÂ and 6Â assists. Manu Ginobili scored 25 points, 4Â rebounds andÂ 2Â assists. Tony Parker had 15 points, 4Â reboundsÂ andÂ 4 assists. Duncan stated how he feltÂ aboutÂ the stakes ofÂ these seriesÂ playedÂ betweenÂ the Hornets’:

“We know what we’re facing. We’re facing elimination,” Duncan said. “And we know we have to put a good game together there. … We’re going to take it in there and it’s do-or-die.” 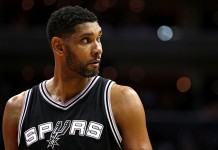