Or at least that’s what it seems like after the two reality stars were spotted enjoying a girl’s night out in Atlanta earlier this week.

According to Atlanta blogger/photographer FreddyO, Kim is in the A to film a guest spot on the Lifetime show “Drop Dead Diva,” and she and NeNe met up one night this week to have dinner at STK, a new upscale steakhouse in Midtown.

As you’d expect both were dressed to impress. NeNe was rocking her short blond ‘do and wore a black leather jacket and distressed jeans while Kim wore her tresses long and was sporting a pair of black Christian Louboutins.

NeNe wanted a sweet drink so the STK mixology department delivered the Strawberry Cobbler, a signature cocktail. Both ladies had the tuna tartare with salad and orders of the Shrimp Rice Krispies, another signature item (not actually made with Rice Krispies).

After dinner, NeNe tweeted that Kim Kardashian “is so sweet,” to which Kim replied, “I’m still laughing out loud! Too much fun!”

Check out more pics below: 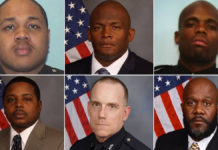